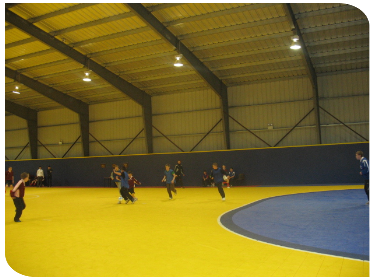 It was a memorable occasion combined with an overwhelming sense of pride and determination for the beginning of all things new at the opening of the BRL Umbro Arena on the grounds of Trinity Comprehensive School in north Dublin.

Headed by Paddy O’Reilly, who is, according to Trinity Comprehensive Deputy Principal, Fiona Gallagher,” the man who cannot say no and who it is very hard to say no to”; the P.E. teacher had got the initial ball rolling for the project.

Built by Ballymun Regeneration Ltd., the arena will incorporate Ireland’s National FAI Futsal Centre following a partnership between Trinity and the FAI alongside a floodlit Astro turf area.

Sports Scholarship students from the school cheered loudly and exchanged high fives with Archbishop Desmond Tutu before the Nobel Prize winner cut the red ribbon to the delight of an enthralled audience. “This is a fantastic place, said the Archbishop, and I have seen how sport helped our country when we were divided by politics. Sport brought us together and we hope that sport will do the same kind of thing here, lifting people out of their poverty and make this Emerald Isle a very beautiful place.” The human rights activist was in Ballymun with the President, Mrs Mary McAleese, having earlier opened a new school music centre at St. Joseph’s National School, as well as to mark the 10th anniversary of the start of the regeneration of Ballymun.

“The FAI is fully committed to a national stadium of Futsal”, said John Delaney, Chief Executive of the FAI. “Paddy O’Reilly, his vision and hard work made this possible.”

Sourced and fitted by the FAI with a specialised modular flooring system, suitable for the high impact game of Futsal, the arena will provide unique facilities for the students of Trinity Comprehensive School and young people from around the area and beyond.

“For the School it is a fantastic addition because we have big numbers, so we can have our P.E. classes in the arena. Also, it is an extra attraction for recruiting students to come to the school and it will give the school a great profile”, declared Paddy O’Reilly.

This website uses cookies to improve your experience while you navigate through the website. Out of these, the cookies that are categorized as necessary are stored on your browser as they are essential for the working of basic functionalities of the website. We also use third-party cookies that help us analyze and understand how you use this website. These cookies will be stored in your browser only with your consent. You also have the option to opt-out of these cookies. But opting out of some of these cookies may affect your browsing experience.
Necessary Always Enabled
Necessary cookies are absolutely essential for the website to function properly. This category only includes cookies that ensures basic functionalities and security features of the website. These cookies do not store any personal information.
Non-necessary
Any cookies that may not be particularly necessary for the website to function and is used specifically to collect user personal data via analytics, ads, other embedded contents are termed as non-necessary cookies. It is mandatory to procure user consent prior to running these cookies on your website.
SAVE & ACCEPT